The Royal Room houses the regalia: objects connected with the coronation ceremonies and funerals of the Polish monarchs, as well as their gifts for Wawel Cathedral, which had been kept in the Cathedral Treasury since the 11th century. Among the most important exhibits is St Maurice’s spear, presented by Emperor Otto III to Bolesław the Brave during the congress of Gniezno in 1000 AD. This mediaeval ceremonial weapon is considered to be the first of the royal insignia used by the Polish sovereigns of the Piast dynasty.

In the same room visitors can see the velvet coronation mantle of the last king of Poland, Stanisław II August, which was used during his coronation ceremony in 1764. On display also are two swords: the coronation sword of August III Wettin from 1733, and a 16th-century blade taken from the grave of Zygmunt II. The large showcase in front of the entrance door shelters royal funeral insignia — crown, sceptre and orb of Kazimierz IV, made in 1492. The central spot belongs to the orb of Anna of Jagiellon (1596), decorated with the engraving of a crowned eagle, accompanied by copies of the queen’s crown and sceptre.

In the middle of the room the Golden Rose, a magnificent example of late-Baroque goldsmithery and gift of Pope Clement XII to Maria Josepha, wife of August III, is hold on display. Among the objects of special interest is a 14th-century rationale, Queen Jadwiga’s gift to the Bishops of Cracow. The use of this rare liturgical vestment is allowed only by special papal privilege. Pope John Paul II wore this rationale during solemn ceremonies held at the Cathedral. 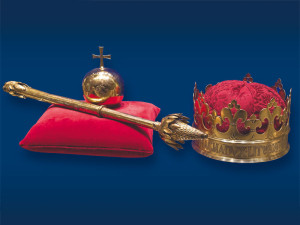 Funeral insignia from the grave of Anna of Jagiellon: orb, ca.1596; copies of crown and sceptre, 1929 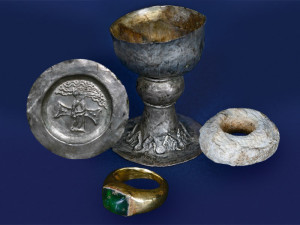 Objects from the grave of Bishop Maurus, second half of the 12th century

In this room a unique collection is kept, consisting of objects donated to Wawel Cathedral, considered the most important church in Poland, by its patrons: kings, bishops and aristocrats. Works of art displayed here used to serve religious worship and include both masterpieces of various handicrafts, such as weaving and embroidery, and 15th- or 16th-century paintings. Visitors can also see slabs from an 11th-century stone building with a well-preserved plaiting pattern decoration. A magnificent silver box (known as a “Saracene-Sicilian case”) decorated with scenes of chivalry, which served for centuries as a reliquary, is one of the most interesting exhibits in this room. Another showcase contains a masterpiece of early Renaissance embroidery: the chasuble donated by Cracow Voivode, Piotr Kmita.

The chasuble, which counts among the most exquisite works of late medieval embroidery, is decorated with seven scenes from the life of St Stanislaus, made with extraordinary precision by a most skilled artisan in the beginning of the 16th century. Objects found in the grave of bishop Maurus are also of particular interest; they are a silver chalice and patena, a golden ring, a bone bead and a lead tablet from the beginning of the 12th century, and together they present an important source to the mediaeval funeral custom in Poland.

This room also shelters a magnificent bishop’s headdress – Tomasz Strzempiński’s mitre, decorated with intricate Renaissance embroidery. Visitors should not miss the late 15th-century painting, Christus Salvator Mundi, which used to hang in the Cathedral, and makes a good example of outstanding Małopolska artwork of the late Middle Ages, reflecting the style of Dutch paintings.

This room displays gifts donated to the Cathedral by the clergy and aristocracy in the period between the 17th and 20th centuries. Visitors can see here unique liturgical vessels (chalices and monstrances) which used to propagate God’s glory, their artistry was therefore fully exposed on festival days. Among the most attractive pieces is the monstrance of Bishop Stanisław Dąmbski, used solely for the exposition and veneration of the Eucharist on Good Friday and during solemn Resurrection processions on Holy Saturday.

The decoration on the monstrance shows Christ as the Host, accompanied by figures from the Old and New Testament, such as Abraham and Melchizedek, Virgin Mary, St Joseph and St Peter. The 17th-century mitre of Bishop Andrzej Lipski, decorated with hundreds of precious and semiprecious stones, is another example of exceptional goldsmith mastery.

A collection of chalices of Bishops of Cracow is also on display, as well as chasubles presented by kings and bishops, which constitute a testimony of the donors’ care for the magnificence of liturgy in the Cathedral. Many of them are made of valuable materials and decorated with precious stones, and were commissioned from the most skilled goldsmiths and embroiderers. A richly ornamented gilded bowl and jug catch the eye in the display case featuring handicraft exhibits. One of the most recent objects in this room is a silver, neo-Gothic crosier of Bishop Adam Sapieha, dating from 1918, surmounted by a figurine of the patron saint of the Cathedral, St Stanislaus, supported by an angel. 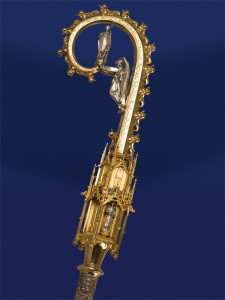 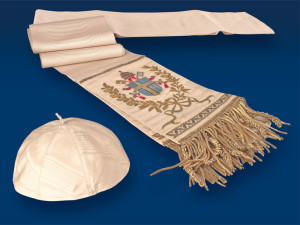 The last part of the exhibition contains memorabilia related to Pope John Paul II who, during his time as Archbishop of Cracow, elevated the Diocesan Museum of Wawel to the rank of Cathedral Museum. The room displays his cardinal’s and papal attire (cassocks, birettas, zucchetti and sashes). Visitors can also see a papal mitre decorated with golden leaves on which the Black Madonna, the symbols of the Evangelists, and John Paul II’s coat of arms are engraved, which had been the gift of Italian goldsmiths to the Pope, and was later handed over to the Wawel Cathedral during the second papal visit in Poland in 1983.

There is also a commemorative plaque offered to the Pope in 1978 by Italian journalists, which is an exact copy of the 16th of October 1978 issue of Vatican official magazine, L’Osservatore Romano, featuring information about the papal election of the Archbishop of Cracow, Cardinal Karol Wojtyła. The room houses an armchair used by the pope during his last, eighth visit to Poland, on the occasion of which he visited the Wawel Cathedral on the 18th of August 2002, as well as a collection of exotic mementos of papal travels from around the world. This collection was started with a goblet made of coconut and silver, presented to the Cathedral Museum by Karol Wojtyła, at the time Archbishop of Cracow, on its opening day, the 28th of September 1978.