St Jadwiga was born in 1374, daughter of Louis d’Anjou, the king of Hungary and Poland, and Elizabeth of Bosnia. Before reaching the age of four, Jadwiga was promised to be betrothed to the son of Leopold of Austria, Wilhelm, and was later engaged to him. However, after the death of her father in 1382, matters of succession took a different turn, and the marriage plans changed.

As requested by Polish noblemen, who did not want personal union with Hungary any longer, Jadwiga came to Cracow, where, in October 1384, she was crowned not as the Queen, but the King of Poland. She then fell under the influence of Polish politicians, who with rare determination began to realise their far-reaching plans.

They prevented Jadwiga’s marriage with Wilhelm, though the prince came to Cracow in August 1385. At the same time they carried out negotiations with the Grand Duke of Lithuania Jogaila (later known as Władysław Jagiełlo). Soon, in February 1386, they promised him the Polish crown and Jadwiga to be his wife. Finally, Jadwiga, who had at first opposed the union, yielded to persuasion on lofty religious motivations, and on the 18th of February, 1386, at Wawel Cathedral, she married Władysław Jagiełlo, who was 25 years older than her.

By this act, along with Jagiełło, she became the leading actor in and the creator of an epoch-making event – the Christianisation of Lithuania. Entering the path to become one of the leading figures in Polish history, Jadwiga developed her spirituality. Source accounts on St Jadwiga testify of the intensity of her religious life and her many charitable works which have been confirmed in donation documents. Soon, Jadwiga became widely venerated as a lady full of nobleness, generosity and charity. 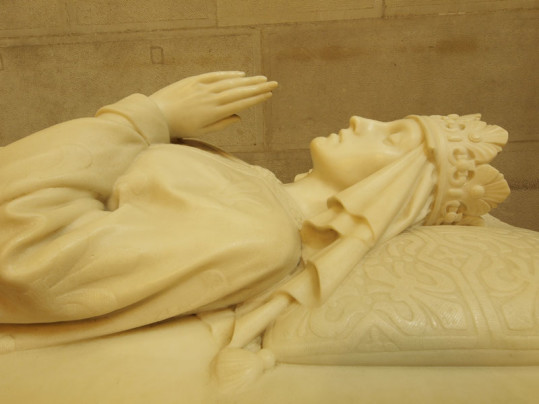 The effigy of St Jadwiga of Poland (detail) 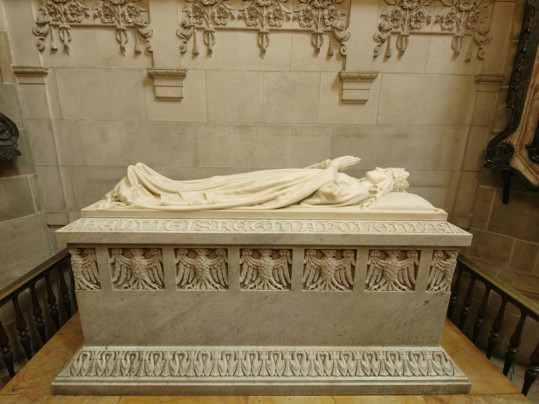 The effigy of St Jadwiga of Poland

Of special note is Jadwiga’s concern for young people studying in Prague and Cracow, which resulted in the most generous donation act and bequest given to the Cracow Academy, due to which she is considered the co-founder of the Jagiellonian University in 1397. Jadwiga’s Christian attitude was also seen in her activity as a peace-maker. She promised the Commander of the Teutonic Knights, Von Sayn, that peace would last as long as she would live.

This promise, though it may be taken as a threat and a prophecy at a time, was given in 1398. In June the following year, Jadwiga gave birth to a daughter who died after three weeks. A few days later, on the 17th of July, 1399, Jadwiga also died. Shortly after her death, Queen Jadwiga began to be venerated as a saintly figure. The idea of her future canonisation followed soon afterwards. For various reasons, known from the history of other personages who were also venerated in this way in Poland, the canonisation of St Jadwiga was delayed. The hostility of the Habsburgs and the writers associated with their court was one of the reasons. 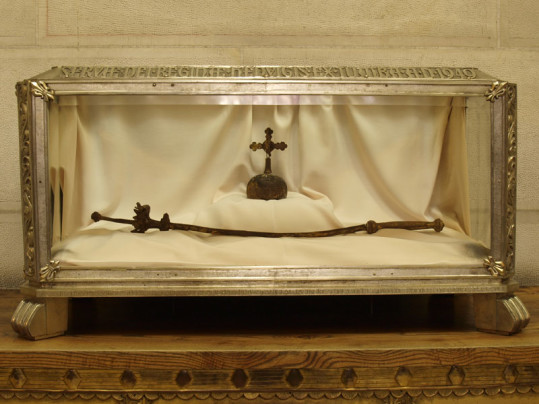 Insignia from the grave of St Jadwiga of Poland

The history of the worship of Jadwiga largely depended on the changing fate of the Polish State, where she was always greatly venerated. At one time, there were no obstacles to her formal canonisation, but she was mistaken for St Jadwiga of Silesia, so it was believed that her canonisation had actually taken place. The application for the formal approval of the worship of Queen Jadwiga by the Holy See was only placed quite recently.

The relics of the saint are at Wawel Cathedral.