Blessed Wincenty Kadłubek is a prominent figure in Polish history, the first scholar and historian whose work was devoted to the history of Poland. He was born ca 1150. He is believed to come from the Lis family. His father was the mighty Palatine Stefan, a brother of the Cracow Voivode Mikołaj (Mikor). Blessed Wincenty began his education in Stopnica, and later came to Cracow where he attended the cathedral school and studied under the learned Cracow bishop, Mateusz Cholewa. 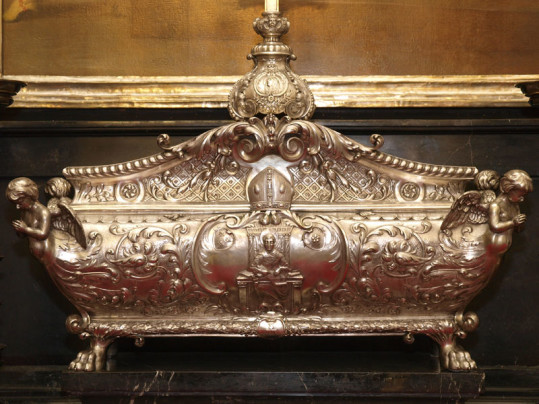 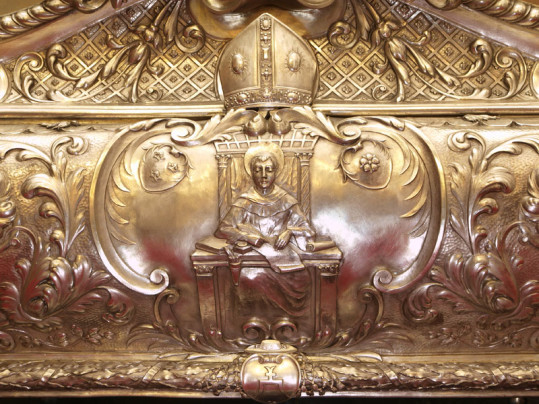 Due to Bishop Gedka’s patronage, Wincenty Kadłubek left Cracow to study abroad. He studied in Paris, then in Bologna, Italy. Having completed his education, ca 1185, Wincenty was back in Cracow to become a cathedral canon. He was a member of the close circle of people around Duke Kazimierz (Casimir) the Just and Bishop Pełka. Before 1189, Kadłubek was ordained a priest.

At the same time, he began writing his Chronicle, which became his life’s work and the greatest work of the period. In 1194, Wincenty Kadłubek moved to Sandomierz. In 1207, he returned to Cracow, where he was appointed the Bishop of Cracow on the 28th of March, 1208. He was consecrated bishop by Archbishop Henryk Ketlicz. Bishop Kadłubek participated in synods in Borzyków, Mstyczów and Wolbórz. The ten years of his tenure of office in Cracow was a success and records show that he was considered a good, exemplary bishop.

He knew how to win people over, both the lay faithful and the clergy. He granted special favours to the Cistercians. He reformed provincial chapters, closed the collegiates in Kije and consecrated St Florian’s Basilica in Cracow. He participated in the 2nd Lateran Council in 1215 and in the coronation of Coloman of Hugary as king of Halych Ruthenia. Having returned from the Rome Council, Wincenty Kadłubek continued to hold his office in Cracow for the following three years. After a decade of his ministry (1208-1218), he renounced this position and resigned from his office. He joined the Cistercian order and settled in the monastery in Jędrzejów.

Due to his efforts, the wooden Cistercian monastery in Jędrzejów was replaced by a stone-masonry structure. There, the seventy-year-old Wincenty Kadłubek fulfilled all the usual duties of an ordinary monk. He lived an ascetic life in the monastery according to the principle “All for God – nothing to oneself”. Kadłubek died on the 8th of March, 1223.

In the 15th century, a monk from Jędrzejów wrote a hymn in honour of Wincenty Kadłubek, in which the bishop was for the first time addressed as “Blessed”. In the years 1583-1640, monastic books recorded 150 miracles which were believed to have happened at his grave. In 1764, Pope Clement XII beatified Wincenty Kadłubek, whose remains were then transferred from the church in Jędrzejów to Wawel Cathedral. He rests in the Chapel of Bishop Piotr Tomicki.

Kadłubek’s greatest work, The Chronicle of Poland (Latin: Historia Polonica), which covers the history of Poland from ancient times to the year 1202, was commissioned by Duke Kazimierz II the Just. It is a four-volume work originally written in Latin. After Chronicle by Gall Anonymous, it is regarded as the main, though not very reliable, source of history of that period.

In order to achieve aesthetic or moral effect, the author did not hesitate to distort facts as he pleased. The themes from the history of Poland alternated with the history of Alexander the Great, Julius Caesar and the Gracchi brothers. Wincenty Kadłubek began his work most probably in 1190 and interrupted it in 1208, when he took the office of the Bishop of Cracow. The chronicle was first published in Latin in 1612; its Polish version dates from 1862. It is ranked among the fundamental works in Polish historiography.