The John Paul II Cathedral Museum is situated on Wawel Hill, between the Vasa Gate and the former seat of the Castle Seminary, in the Cathedral House, which was made up from two 14th century buildings. Its eastern part, adjoining the Vasa Gate, was formerly a tenement built in the time of Kazimierz the Great, which had been in the hands of the Rorantists of the Sigismund Chapel since the 16th century. The Gothic House – seat of the college of Cathedral Mansionaries who performed the liturgy in St Mary’s Chapel – forms the western part. 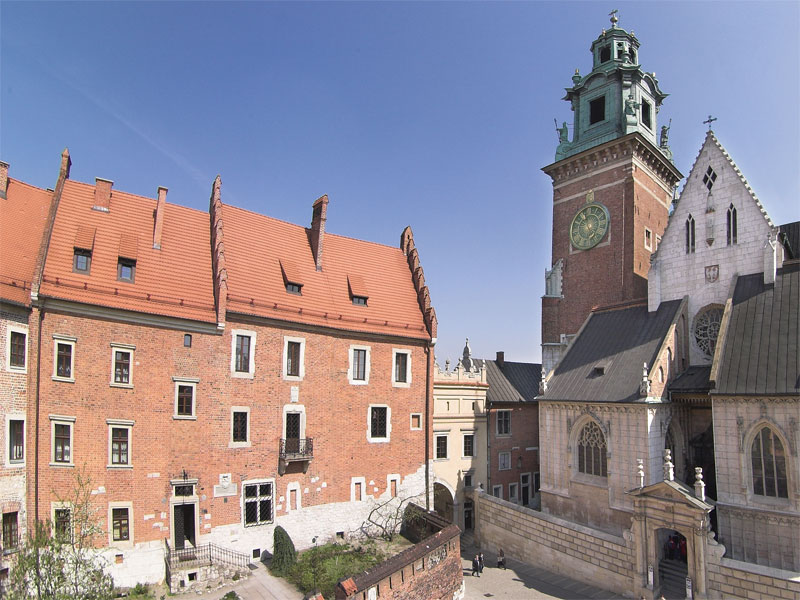 In 1901 both buildings were purchased by the Wawel Cathedral Chapter in order to house historical pieces from the Cathedral. Thorough restoration was undertaken by two leading architects of the time: professor Sławomir Odrzywolski and professor Zygmunt Hendel. In 1906 cardinal Jan Puzyna established the Diocesan Museum in the buildings; this event is commemorated by a marble plaque over the lintel, flanked by the coats of arms of the founders: Cardinal Puzyna of ducal family and the Cracow Cathedral Chapter itself. In 1975, Cardinal Karol Wojtyła decided to transform the Diocesan Museum into the Cathedral Museum, where objects from the Wawel Cathedral would be kept.

On the 28th of September 1978, on the 20th anniversary of the day he was anointed bishop, Cardinal Karol Wojtyła, at the time Archbishop of Cracow and prospective Pope John Paul II, ceremonially opened and blessed the Wawel Cathedral Museum, which was to be his last official duty at Wawel before the papal election. Soon the Cathedral Chapter decided to give the Museum the name of John Paul II.

The exhibition shows the oldest and most important Polish regalia, as well as objects of religious cult: handicraft, clothes, paintings and sculptures, being donations of kings, bishops and members of nobility and ranked among the nation’s most precious treasures. The Museum exhibition presents the most precious objects of various times, organised according to their historical and artistic value rather than chronological order. Until recently most of the exhibits were kept in the Cathedral Treasury, which is one of the richest in Poland, even though it is now only a fraction of what it used to be, as it had been looted many times by invaders during various wars involving Poland. Nevertheless, the Wawel Cathedral Museum hosts one of the most valuable art collections in Poland, both in artistic and historical terms.