The first cathedral church at Wawel was probably built shortly after the Cracow Bishopric was established in the year 1000. Too little is known about the original cathedral to be able to reconstruct its appearance. More is known about the successive Romanesque church from the turn of the 11th and the 12th centuries. Its construction is attributed to the reign of Duke Władysław Herman (1079-1102). The newly built church was consecrated in 1142. It was a triple-aisle basilica, built in limestone and sandstone, probably with galleries over the side aisles. On the east and west side of the church were galleries built on a rectangular plan with semicircular apses and with crypts under the galleries. Two towers built on a square plan flanked the west side of the church. Substantial parts of the structure have survived intact to this day, including St Leonard’s Crypt and the lower part of the south tower. 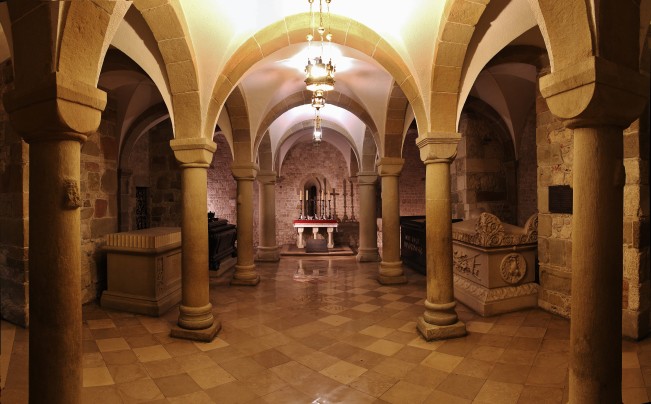 Cracow Cathedral was the centre of worship of St Stanislaus (Stanisław), the Cracow bishop who was canonized in 1253 and murdered in 1079 on the orders of King Bolesław the Bold. The grave of the bishop became a destination for pilgrims from all over Poland and neighbouring countries. The veneration of this saint was associated with the idea of the unification of the Polish Kingdom after the period of its regional disintegration. It was for this reason that the tradition of having coronations of Polish kings at the Gniezno Archcathedral was broken on the 20th of January. 1320, when King Władysław the Short was crowned at Cracow Cathedral, close to the relics of the patron saint of the restored Polish monarchy. After that, Wawel Cathedral became the site at which the coronations of Polish rulers took place.

However, the Romanesque church, damaged by time, as well as the fire of 1305, was thought not magnificent enough to be the main church of the Cracow Diocese. Therefore, Bishop Jan Muskata took the initiative to have a new church built, but the project was never to be completed and only the foundations of the Gothic polygonal chancel were built. The present cathedral, which has survived virtually unaffected, was built in successive phases: from 1320 to 1346 (the chancel with its ambulatory) and from 1346 to 1364 (the aisle body), under the bishops Nanker, Jan Grot and Bodzanta. A number of masonry workshops were employed one after another to construct the cathedral. The church was consecrated on the 28th of March, 1364. The Gothic cathedral was built in the form of a triple-aisled basilica with a transept (an area planned crosswise to the nave) and a chancel, built on a rectangular plan, with an ambulatory.
As soon as the Gothic church was raised, bishops and magnates had the first chapels built along its external walls. This process continued throughout the 14th and the 15th centuries. The 16th century saw major changes in the cathedral’s interior. The beginnings of the Renaissance in the cathedral, as well as generally in Poland, are connected with the activity of the Italian sculptor, Francesco the Florentine, who executed the sarcophagus of King Jan Olbracht (died 1501). However, the breakthrough was the construction of the Royal Chapel, known today as the Sigismund Chapel. It was commissioned by King Zygmunt (Sigismund) I the Old and executed by a team of Italian artists to the architect Bartolomeo Berrecci’s design.

It soon served as a model for a number of successive Renaissance and Mannerist bishop mausoleums which replaced earlier Gothic structures at the cathedral (the mausoleums of Piotr Tomicki, Samuel Maciejowski, Andrzej Zebrzydowski and Filip Padniewski). Some mediaeval altars, including the High Altar, gave way to new Renaissance structures. Many royal and bishop sarcophaguses and epitaphs were also created in the 16th century. Renaissance and Mannerist cathedral furnishings were works by outstanding, mostly Italian, artists who had settled in Cracow. Along with Bartolomeo Berrecci, these were Giovanni Maria Padovano, Jan Michałowicz of Urzędów and Santi Gucci. Magnificent works imported from Nuremberg are particularly noteworthy: foundry works (sarcophagus plates, grilles), gold-work (some elements of the Sigismund Chapel decor) and paintings (casements in the altar in the Sigismund Chapel). All these are works by Peter and Hans Vischer, Peter Flötner, Melchior Baier and Georg Pencz.
During the two centuries that followed, the interior decor of Wawel Cathedral was thoroughly remodelled. In the 17th century, due to generous donations by royalties, bishops, magnates and canons, almost all furnishings from earlier eras were removed and replaced with new altars, stalls and paintings. Materials typically used in the new era were black marble from Dębnik and rose marble from Paczółtowice. As a result of the remodelling of the nave and the chancel in the Baroque-style, a composition axis became clearly visible, with the confession of St Stanislaus and the High Altar as dominant elements. Following earlier traditions, more domed chapels were built, such as the chapels of bishops Andrzej Lipski and Jakub Zadzik and the mausoleum of the Vasa royal dynasty, all of them referring in form and content to the Sigismund Chapel. 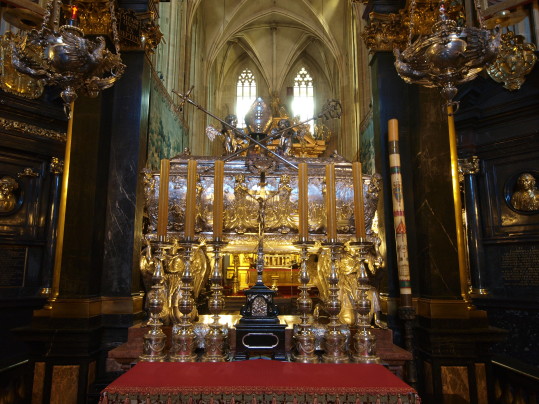 Alterations in the 18th century gave the cathedral its late-Baroque appearance. Most interior furnishings that had varied previously in terms of material, form and decoration, were replaced with new elements in an orderly and consistent manner, following the principles of symmetry and with clear compositional axes. The numbers of side altars were significantly reduced. Domed mausoleums of Cardinal Jan Aleksander Lipski and Bishop Andrzej Stanisław Kostka Załuski were built at that time, but the royal chapel of the Saxon Wettin dynasty remained nothing but an idea. Unfortunately, in order to have more light shed into the cathedral interior, the walls of the ambulatory were raised to the level of the chancel. By doing this, the spatial layout and the body of the eastern part of the church was changed. 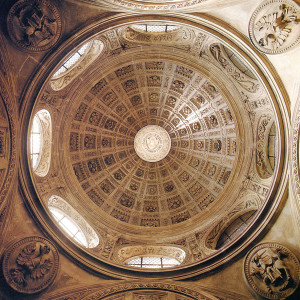 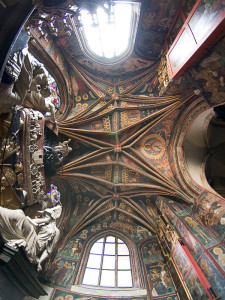 Vaulting at the Holy Cross Chapel

It should be noted that the cathedral’s Baroque furnishings were generally designed by outstanding Italian architects (Giovanni Trevano, Giovanni Battista Gisleni and Francesco Placidi) or by architects who were trained in Italy (Kacper Bażanka).
The loss of Poland’s independence adversely affected Cracow Cathedral. It no longer received lavish royal and bishops’ donations, as estates of the Cathedral Chapter, once extremely rich, became reduced to a minimum and it was not enough to adequately provide for the needs of the cathedral. However, in the 19th century the cathedral became a destination for patriotic pilgrims and a venue for grand ceremonies on anniversaries of important events in Polish history.

The burials of national heroes of the struggle for Poland’s independence, Tadeusz Kościuszko and Duke Józef Poniatowski, as well as one of the nation’s spiritual leaders, the poet Adam Mickiewicz, were of great importance for the nation and made the cathedral a Polish Pantheon. It is also the place of final rest of other meritorious Poles. This tradition was continued in the 20th century, when the remains of the poet Juliusz Słowacki, Marshal Józef Piłsudski and General Władysław Sikorski were buried in the cathedral’s vaults.

A fundamental role in giving the cathedral its present appearance was due to the renovation that took place in the years 1895-1910 under Sławomir Odrzywolski and later Zygmunt Hendel. The building, along with its furnishings, underwent thorough conservation at that time. Historic layers of successive periods were preserved, although, unfortunately, some Baroque decorative elements were removed. Of note is the fact that new works of art were also added, namely royal sarcophaguses of SS Jadwiga and Władysław of Varna, sarcophaguses of bishops, wall paintings, stained-glass, grilles and many other elements. Some of them are works by prominent artists of the Art Nouveau style, among them Józef Mehoffer, who designed stained-glass windows and wall paintings in the Szafraniec Chapel and the Treasury.

The 20th century was a period of continuing renovation of the cathedral and its monuments. All the cathedral’s facades and some of the chapels were restored a few years before the year 2000. In this way, the church prepared itself to become the centre of events on the Millennium of the Cracow Diocese and the Great Jubilee of Christianity. 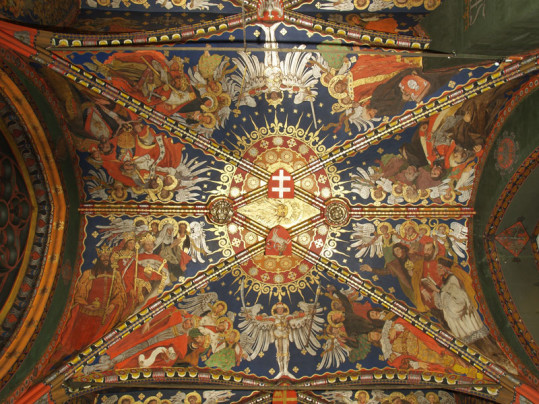 Polychrome on the vaulting of Queen Sophia’s Chapel

For as long as a thousand years, the Cracow Metropolitan Basilica of SS Stanislaus and Wenceslaus has been the “mother of churches” in one of the most important Polish dioceses which in 1925 was raised to the rank of an archdiocese. The Lord’s service has been always conducted here with great splendour and was considered a model for other churches. In its glorious days, more then a hundred priests were involved in the cathedral services, and prayers continued day and night without interruption.

The Cathedral Chapter was assisted by curates at the top the cathedral clergy hierarchy. Special priest groups were entrusted with special tasks to serve some of the chapels: Mansionaries, Psalterists, Prebendaries of the Chapel of the Holy Trinity and the Chapel of the Holy Cross, as well as Rorantists and Angelists. Chant and organ music added lustre to the liturgy held at the cathedral. In the 17th century, a vocal and instrumental ensemble was installed at the cathedral often under outstanding composers: Franciszek Lilius, Bartłomiej Pękiel and Grzegorz Gerwazy Gorczycki.

Wawel Cathedral holds a very special place in the history of Poland and the Poles’ national awareness. For centuries it has been the place of worship of St Stanislaus, the saint who has been inextricably connected with the idea of a united and independent Polish State, a concept which was equally valid in the period of regional disintegration, the Partitions of Poland and communist rule. The grave of the martyr has been considered the Altar of the Homeland. The history of the Cracow Diocese and its main church reached its culmination at the election of its host, Cardinal Karol Wojtyła, to the Holy See as Pope John Paul II.